So this year is shaping up to be the year of the con. First up: WonderCon (I'll also be going to ComicCon and WisCon). You've seen some snippets from this year's event, but it's taken until now for me to ahve the time and the energy to do a full write-up. So, here it is: WonderCon 2001 (*insert fanfare here*).

DAY ONE HIGHLIGHTS
Day one was April Fool's Day, and the joke was on me. I realized that I'd left a notebook at school that I needed to do some work, so had to go all the way to Stanford and back before I could get my geek on (which was supposed to start at 12:30). Not cool. Having accomplished that, I headed straight to the Comic Arts Conference side of things for a panel on queer space, othering, and identity in comics (I was mostly there for the queer space in The Sandman paper. Some interesting stuff, and I met some cool people afterwards, one of whom told me about Archaia publishing - where my research funds went to die.

So, I was tipped off that Archaia publishing, one of the publishers that had a booth on the exhibit floor, had been known to have something called a "buy two, get three free" sale. My initial response to this was, "wait, buy two, get a third one free?" Oh, no, my new acquaintance said -- pay for two books, get three additional ones free -- FIVE BOOKS FOR THE PRICE OF TWO! So I was like, "There, now." So there, then, we went, and -- lo, and behold -- they were having the sale in question. Now, I'd had no intention of buying one book, let alone two. But, if they were going to throw down with a crazyface sale like that, the least I could do was *look* at the books, right? And it was probably just some random publishing house that wouldn't have anything I wanted anyway, so no danger. Except that it turned out to be the place that published The Lone and Level Sands, the graphic novel that I almost taught this quarter, which is Moses v. Pharaoh from pharaoh's p.o.v., drawn from biblical and scholarly sources. And they have all this interesting mythology and religion related content. And I might have accidentally gone into a full-on book buying frenzy and dropped about $100. Which, luckily, will all be reimbursable from my research funds. Phew. (It wouldn't have happened if not for the research funds.) I didn't find out about the $5 galley copies until after the spree (and they didn't have the stuff I bought in galley copies anyway, except for one book, which was volume 2 of something), I might have gotten a couple of those on Day Two. We'll talk more about that later. Back on Day One, I also talked to one of their editors about a forthcoming booked called The Immortals, which will be a set of independent stories that take place in the world of Greek mythology, but are more grounded in reality. So Pegasus might show up, for example, but he won't have wings. Or something. The book will be original stories in the world of the movie, as opposed to a tie-in. Anyway, it piqued my interest, and resulted in finding out about a panel the next day, at which details of a special signing with stars of the movie would be revealed. I was more interested in the book, but figured, "Why not?"

I figure that a lot at WonderCon. Something about all the collective geek-effervescence makes me a little crazy. This probably accounts for how I got the autographs, and then gave them away. More on that next time.

In the interim, here's what I bought: 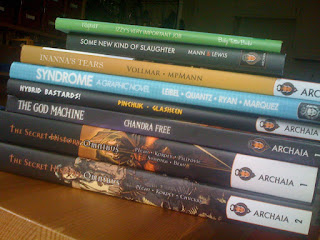