So, HBO is in talks to make American Gods. Here's what I've said about it: 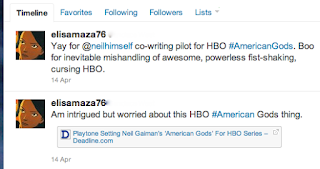 The conversation I had with my roommate after hearing the news was mostly about how I just assume they'll try to cast a white person as Shadow, which will be what it takes to make me not watch it. Feeling like they're going to mess it up will not be enough -- if it makes it to air, I'll watch it to see *how* they mess it up. But if they cast some white dude, or some dude who really just looks white, as opposed to looking like he's brown of some sort but people are not sure which sort (unless they're black, in which case they know he's black), I will hulk out, and I will not watch. Trust.

Anyway,  Racialicious is talking about it today. Topics covered: Gaiman usually not being a jackass. Gaiman sometimes being a jackass. Hoping Gaiman will not be a jackass, and will have enough clout to keep the production free of jackassery. Gaiman's wife's.