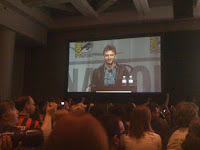 "Now you get to nerd pwn other people..."
--Chris Hardwick, moderating the Doctor Who panel, talking about this:

He wasn't talking about these, but I'm pretty excited about them, too:
Convention post coming soon. For now, I'll leave you with Neil Gaiman's description of Doctor Who. He was talking about how sometimes people are afraid they have to catch up on 47 years of excitement and had this to say:

There's a blue box. It's bigger on the inside than it is on the outside. It can go anywhere in time and space, sometimes even where it's meant to go. And when it shows up, there's a bloke inside called The Doctor. Something will be wrong, and he will try his best to sort it out. He will probably succeed, because he's awesome. 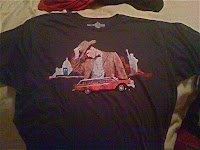 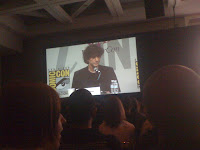 Email ThisBlogThis!Share to TwitterShare to FacebookShare to Pinterest
Labels: ComicCon, Doctor Who, geekery