Perhaps I was a horrible human being in a former life?

This morning, I woke up and decided that I would take a bath. There's been a lot going on lately (thus the silence on the blog), and I've been thinking that maybe a nice, relaxing bath would help. I heard my roommate moving around and decided to just chill in bed until I could take over the bathroom. Now, in addition to the normal sounds of my roommate moving around, there was a loud, crashy sound, not quite at the level of godawful racket, but close enough for 8am on a Saturday. I decided not to investigate. It sounded like something - probably something of mine, given that much of what occupies the apartment is mine - had been broken or knocked over, and I just didn't have the heart to find out what it was first thing in the morning. My assumption was that the towel rack had been ripped out of the wall, given the metallic clanginess of the sound.

A bit later, after I'd prepared a playlist of relaxing songs to listen to while in the bath, I went in to start running the water. Here's what I found:

Not surprisingly, this did not lower my stress levels.

Once I was able to breathe evenly and think in actual words, I knocked -- firmly for a.m. Saturday, but not as aggressively as could be justified upon finding one's bath towels in the toilet -- to ask my roommate how my towels had ended up in the toilet, and why they were still there. He looked terrible, and not just in the "someone woke me up abruptly" way, which is probably why he's still alive. After some confusion about what I was asking him, he managed to explain to me that he's on an antibiotic that he's just started taking, that it's making him really dizzy, and that when he got up and went to the bathroom this morning, he fell and hit his head, and must have knocked the towels into the toilet at that point. He somehow didn't realize he'd done this, and got back into bed.

Now, I have to believe him. I have to believe that the crashing I heard was him falling, and probably trying to grab onto the metal rack that my towels are on. One of the screws that holds it against the wall is loose (it's always been loose), so it wouldn't have helped. And, sure enough, that screw has been pulled out of the wall in a way that suggests someone tried and failed to use the shelf to stabilize himself. 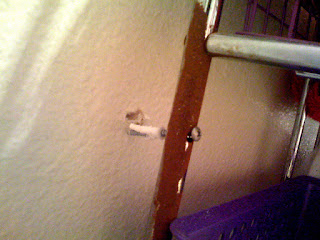 Did I mention that the toilet hadn't been flushed, so my bath towels were knoecked into a toilet full of urine, then left there?

Because the fact that I have to believe him -- I am not yet capable of being the human being who does not believe him -- doesn't mean that I don't hate him. Oh, no, not the way I did before, which was really just me not wanting him to be my roommate anymore. No, now I hate him for real. I hate him the way you'd hate someone who left your towels soaking in urine. Just like that. And if that makes me a horrible human being in *this* life?


I'm ok with that this morning.

Pleasure and excellence on the decline


in the destinies of these two pairs of words is a suggestion of a turning in American culture, and one that has influenced the world. It is a turning away from an arguably aristocratic idea of the intrinsic worth of things: from pleasure, with its sense of an internal condition of mind, to fun, so closely affiliated with outward activities; from excellence, an inner trait whose attainment is its own reward, to achievement, which comes through slogging and recognition.

It's an interesting read - check it out here. I'm inclined to see a relevant correlation between the decline of the use of these words and a decline in the value of the concepts the words express. I'd suggest that this relates to the decline in the value placed on humanistic inquiry as well, though that's a case to make in a longer post than I can do right now. Having spent so much of the last few years being confronted by people who take it as a personal offense that I don't validate every effort they make with an A, I am not at all surprised to read this--old, sad news, in my case. Perhaps the more thought-provoking part of the article, for me, was the final paragraph:


The world in which “pleasure” and “excellence” roared was less equitable than our world today. It shut out vast categories of humankind. In the intervening years, those exclusions dwindled; the world opened up for so many, not least in the United States. But with that change has come another: what would seem to be a growing intolerance for merely being, and an anguished insistence on doing, doing, doing.

Excellence is not, at its core, an egalitarian principle. I'm not sure that I'd say the same thing about pleasure, though I haven't thought about it yet.
Posted by elisamaza76 at 4:57 PM 1 comment:

An open letter to racists, some of whose best friends are black

Republican state Rep. Terri Lynn Weaver is facing criticism after posting a picture on the Internet that some are calling racially offensive.

Weaver said that a picture that she took with her pastor in blackface dressed as Aunt Jemima was just Halloween fun and doesn’t understand why the photo is offensive.


Representative Weaver says that this is all in fun, and "feels some Democrats are making something out of nothing." She is not a racist, she says, pointing out that "some of [her] greatest friends are black."

Oh, I see - some of her best friends are black. You know, I begin to wonder who all these people are whose tight relationships with people of color have not shown them that denigrating people of color (or laughing when someone else does, or thoughtlessly employing symbols of denigration) is not appropriate. Seems a bit strange, no? But, I'm all about solutions here at in medias res, so here's a handy form letter I've whipped up for black folks to send to their friends who are not black. Please feel free to modify with the ethnicity and common types of "funny" denigration most appropriate for you:

And, for the record, pointing out that "some of your best friends are black" will simply make it worse, because what sort of person would do something that is so obviously denigrating of their best friends?

Yours in friendship,
Black Friend


I hope you find this a useful tool. And, remember: blackface is not cute.
Posted by elisamaza76 at 6:49 PM No comments: