So the highlight of day 3 was obviously the Doctor Who panel, which I've already posted about a little bit. It was moderated by Chris Hardwick, and the panelists were Toby Haynes (director of stuff, including Sherlock), Mark Shepard (that guy who's in all those shows you love) and Neil Gaiman (purveyor of awesome). 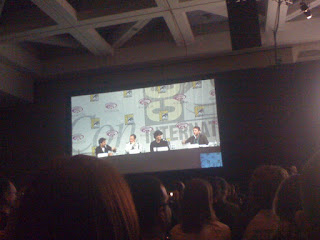 Before the panel, there was The Line. I got up early (for me, on a Sunday) and went to get in line, because I knew that Doctor Who + Neil Gaiman at Wondercon would be a fool. M. met me in line and was kind enough to supply me with caffeine (key on day 3 of con.). We got ushered into the big room and given free tees. In case you've forgotten, they look like this: 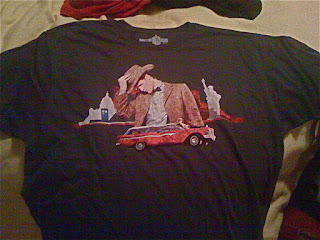 Then we found seats, got settled, and waited for the magic to begin. After the intros, there was a 6 minute preview (I mostly won't talk about the footage, partially because it makes no sense to me, because I am so far behind, and partially because it was lots of quick cuts and snippets that you will find better described other places). The big hype was that 2 episodes, I believe, are set in the US. President Nixon is involved.

There was much talk of Neil Gaiman's long-awaited episode, which was postponed for money reasons.
"They took other episodes out round the bike shed and beat them up and took their dinner money and gave it to my episode," Neil said. He also said the thing about how not to get caught up in all the history, which I liked a lot, and which I quoted in the post linked above.

And there was a lot of talk about the easiest/hardest thing about filming Doctor Who. Mark said that the easiest is the passion everyone brings to it, while the hardest is that TV is so much more distant than live theater, harder to connect with the audience. Neil said the hardest was realizing that reality is expensive, which makes making TV difficult. The easiest was the creative freedom. Toby said something similar, that the "dream killer" meeting, where all the production realities are brought out is most difficult, but that the best is how creative everyone gets to make it all work out.

Some fun footage, entertaining to listen to them talk about the behind the scenes fun, and I'll be super excited to see the eps. when I get to them.

Also on day 3: I went to great panel on female spies and private detectives. Speakers were Jennifer Stuller and Trina Robbins. I now absolutely need to read a graphic novel called Queen and Country, and I bought a book from Trina called Eternally Bad - Goddesses With Attitude. Also checked out a presentation on the Nikopal series, which I'd also like to read. So many books, so little time... 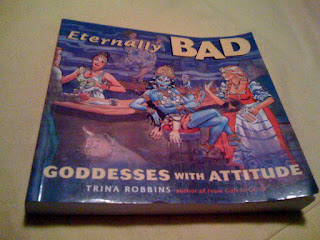 Seen around the conference that day:
I petered out early on Sunday - after a full weekend of the crowd I was ready to call it quits. I'll have to pace myself better at ComicCon, there will be both a bigger crowd and since I won't have the advantage of being able to just go home to my own apartment every night. And since I'll be presenting on one of the days. We'll see how it all goes. I'm hoping at least that the fact that I won't also be teaching means that I'll be able to do daily updates, rather than saving it all until the week after to start posting about it...