The vampire squid from hell

Who knew there was such a thing?

The vampyroteuthis infernalis ("vampire squid from hell") is a small deep sea (2000-3000ft) cephalopod, growing to about 1ft long.
It is the only known living species in its order (vampyromorphida), and shares characteristics of both octopus and squid. It has 8 arms like an octopus, but they're joined by a webbed skin, the inside of which is black, giving the appearance of a cloak. 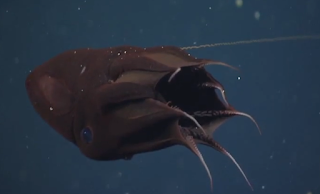 Its large eyes may appear blue or red, according to the light (I'm guessing the "cloak" and red eyes account for its name). The arms that are missing on the octopus, and which are tentacles on a true squid, are, for the vampire squid a pair of extra-long, filament-arms, used to sense prey (which is then caught by the 8 standard arms). These are kept tucked away when not in use.

When the vampire squid is threatened, it flips its "cloak" over its body, to disguise its appearance.

Vampyroteuthis breathes just fine at oxygen levels of as low as 3% in the really deep sea, and does not change colors like cephalopods from more shallow depths, but is covered in photophores that it uses to disorient prey -- again, maybe the idea of vampire-like attributes (hypnotic power?) and its home in the way-deep depths contributing to the name. 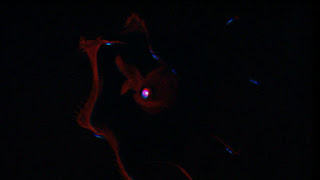 It's looking at you.
One more reason that nature is awesome. Also why both monsters and aliens are often based on cephalopods.