On Saturday, I went in earlier than I'd planned to go to the Archaia panel. 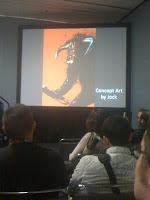 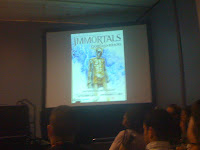 The Immortals book sounds cool, and I'll probably get it when it comes out. They're also doing a previously unpublished "Jim Henson's 'The Storyteller,'" which sounds pretty awesome, and I heard some more about the things I'd purchased (and about "Days Missing," which I'd not yet purchased but decided to based on the presentation). I had other panels I wanted to attend more than the Immortals film panel, but I figured I'd try to get a wristband for the signing, since both Kellan Lutz (Emmett from "Twilight") and Henry Cavill (the new Superman) were maybe going to be there. I went and stood in the line (got an early crack for having gone to the panel), got denied, then went back and managed to get a wristband - this was all more of a time investment than it sounds like right now -- the majority of the morning, and long enough for the people at the Archaia booth to start commenting on how they really hoped I got a wristband, given that I'd been there a few times, bought a lot of books, etc. I did, on the second pass, get a band.

In the time before the event, I went to the Cowboys and Aliens panel - the movie looks cool. Daniel Craig + Harrison Ford? Yes. The panel was Roberto Orci (co-writer) and Jon Favreau (director). Aside from the fact that the asshole next to me was sitting in his chair diagonally and that someone brought an infant to a big, loud panel and Wondercon, it was a good time. They showed footage and talked about the film in interesting ways. Favreau joked about really wanting to put himself into it, but not doing so after McFarlane made fun of him for doing that (on Family Guy). Then said that, more seriously, he didn't want to blow the reality. He wanted to emphasize that the character are freaked out by all of this, while the audience is laughing. I like that it looks like a real western, but also like the kind of alien movie where people get snatched up left and right. I think I'm in.

The panel was nice, but if I"d known that attending it would cause me to get locked out of the Comic Arts Conference panel on surviving trauma: becoming a superhero or a supervillain, I'd have cut out early. That was actually the one I was planning on that day, so it was disappointing to miss it.

So, after a bit, I lined up for the signing. Turns out Lutz hadn't shown, and it was Henry Cavill (who'll be playing Theseus), Luke Evans (Zeus), Tarsem Singh (director), and Isabel Lucas (Athena). Archaia had given us a nice, big poster, which I thought we'd get signed, but the studio was only allowing us to have a smaller, less compelling movie flyer signed. Singh was friendly, Evans was obviously ready to go home, Cavill -- who seemed very normal looking (albeit quite handsome) and not particularly super --  was obliging (I asked if he could sign "to Candace," and he was like, "Of course! How do you spell yours?"), and Lucas seemed sort of dazed. It must be exhausting, flying in for an hour of questions, a run of interviews, an hour of signing things, then jetting back out to wherever you've come from.

On the way out, the ladies I'd been talking to on the way in (of course I was talking to people on the way in.) were gathered around, obviously in some distress. It seemed one of them had been kicked out of line for giving Cavill a gift, some funny picture she'd had of him (we weren't supposed to have them sign anything besides that one standard issue poster, and while she hadn't tried to have him sign that picture, they'd kicked her out as line anyway, with no autograph. This was tragic, because she was a *huge* fan. So, given that I'd kind of gone just because, and since I"m really not that big into autographs past the excitement of meeting the person in the moment, I gave her my poster. But this is a picture of us. 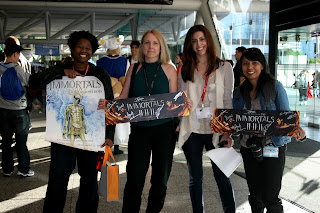 I'm holding the nicer poster, which is the one we couldn't get signed. The lady next to me is holding the poster I got signed. I'll admit that if I'd been more impressed with Cavill, she'd probably have been out of luck.

Some other sights from around the convention.

The #1 quote of the day was from M., surveying the crowd, declaring that, "People wear all kinds of crazy-ass shit." Part of its fabulousness is that M. rarely says things in quite that way.

The number #2 quote of the day was form a new acquaintance who, in talking about how to get students to perform better in class said, "I say bring back human sacrifice."