The weekend that was

Let's see - first there was karaoke on Thursday: 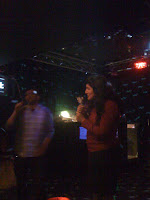 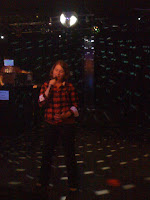 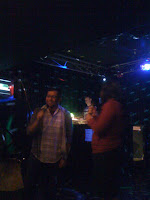 Then, on Saturday, afternoon, finished season 1 of BSG and started season 2. I like some of where the plot is going, was confused by the emo interlude, and am going to have to try really hard not to throw things at the screen every time Baltar strikes a Jesus pose. His is not the only anvil on the show, but it's the one that was bugging me most last time.


In the evening, I went to a murder mystery dinner (my first), hosted by M. Our mystery setup was a film premiere in the mid-30s. My character was an actress turned gossip columnist named Tat Elyale. Here are some of the other suspects: 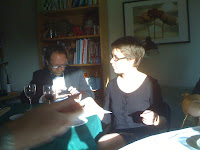 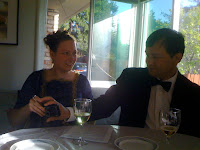 Hi Voltäje and Sel U. Lloyd 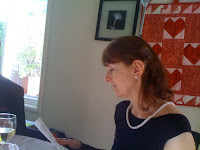 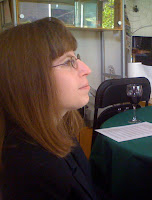 
When we were done with dinner (tasty!) and dastardly deeds (multiple murders, several affairs, some blackmail, and even a little bigamy), I couldn't resist one last act in character. My faux column on the evening's events:


Well, darlings, never a dull moment in Tinseltown -  and this one's a drama to die for!

Last night, a lucky few glamorous guests (including yours truly!) gathered to take in the premiere showing of W. Anton Powar's newest production, Powar and Greed. But before a single reel had rolled, it became clear that the drama was offscreen. Powar and Greed was nowhere to be seen, but there was more than enough deception, betrayal, and naked ambition to go around. Another night in Hollywood, you say? Not quite: this time, when the lights went out at Power Oriental Gardens Theater, it was curtains for Powar! Aspersions were cast but, in the end, the likeliest suspects were found to be innocent...well, not guilty of the murder, at least!

And all this only a year after the loss of Powar's late muse, Mallisa Ann Greede...

With so many likely to gain from Powar's death (and so few above suspicion), it seems unlikely that we'll ever know the true story of Powar's final bow. Though rumor has it there's already a cigarette girl peddling a script...

And, to finish out the weekend, I went to a birthday party on Sunday. Hung out with good folks, ate a lot of Tandoori chicken, and found out that there's a song called "Do the Ricky Bobby." Yes, *that* Ricky Bobby. Hilarious.