All kinds of excitement

An exciting weekend, and it's only Friday night!

Last night was my second time up singing with my friend C's band. Here are some shots of them rehearsing: 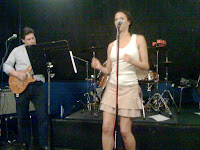 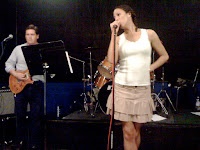 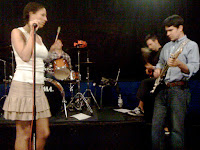 Something is very wrong in this shot.
The show was a lot of fun. Sorry, I don't have any pictures of that - too bad, because C and I both looked hot! After the show, there might have been some hijinks and shenanigans. Note to self: don't do that again any time soon. Got to bed around 2:30, but without my CPAP; woke up at around 5:30, but without the benefit of real sleep. Tried and failed to go back to sleep, so I dragged myself onto Muni and back to my place (no, nothing that exciting - took cab back to friend's place and was too late to try to Muni home) by about 8. Slept for real for a couple of hours, then got up to get ready. Ready for what?

Yes, I went to WonderCon. I hadn't even thought about it, but a friend called a couple of days ago and was like, "So, I'm going to go to this geeky thing. It's WonderCon. You should come with me!" In the face of such vicious arm-twisting, what choice did I have? So, we were meeting at noon today, which seemed like not at all a problem when I planned it. Sadly, I had not predicted 2 shots of Nob Creek, 1 Jack & Coke, and an uncounted number of sips from my friend's drinks. Needless to say, the morning was a little rough - I'm old, and do not handle such poor decision-making as resiliently as I used to - but I made it to the con. I was late, but that was actually a Muni issue. M. wanted to go to Richard Hatch's Battlestar Galatica, etc discussion at 12:30, so that was our first stop. It was interesting, mostly for his comments about what he thinks the future of sci-fi shows is/should be, and a couple of amusing moments. With a little help from M. and her iPod, I managed not to pick  up any more spoilers.

We hit the exhibit floor for a little while, but given how I'd started the day, I needed food. So, we walked up to Mel's and had a tasty burger and corned beef hash (we each ordered one, then split). Was just what the doctor ordered, and I was ready to wander the exhibits more. I wasn't looking to buy anything, but wrote down some titles that looked potentially interesting. Like this one: 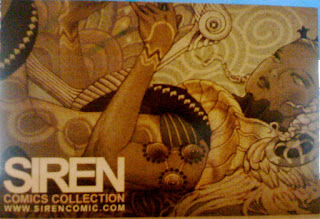 Also looked at a lot of t-shirts - M was lookingto buy one. There were some amusing ones, but none that I *really* needed. I had to get a picture of this one, though: 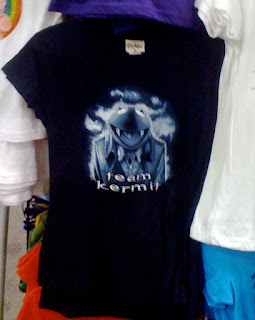 Also on the vampire front, I finally got to taste the Tru Blood beverage! It wasn't bad - reminded me of something I'd had before. Sort of like a carbonated fruit punch. I just now figured out that I was thinking of Tahitian Treat. Tru Blood basically tastes like Tahitian Treat. It's a little thinker-looking (more syrup?) than I remember TT being. 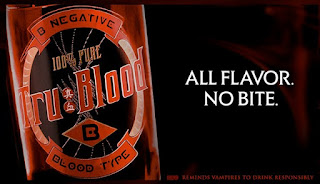 M and I also went to a book talk by the author of Ink-Stained Amazons and Cinematic Warriors: Superwomen in Modern Mythology. Her presentation was fun, though the discussion was pretty lackluster - I'll probably get the book. (Yay, research fund!)

Over the course of the day, we wandered past some of the people there to sign autographs. Saw Richard Hatch again, Lou Ferrigno (The Hulk!), Peter Mayhew (Chewbacca!), Aaron Douglas (Chief from BSG - kind of a huggable cutie in person), Adam Baldwin (Jayne from Firefly - very handsome in person), Brent Spiner (Data), John de Lancie (Q) and this guy: 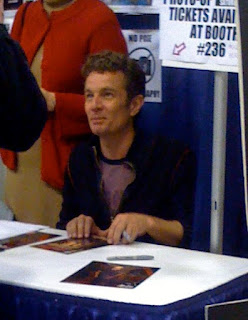 I hit a the proverbial wall a little after 6. We'd walked the whole exhibit floor by that time, and still no tee for M. I took my leave as she was heading to Kevin Smith's Q&A.

Was a fun day. I might go back on Sunday for the closing event, a big screening of "Once More, With Feeling" - haven't decided yet. For now, time to get a much-needed full night's sleep!