Fun times today. Went to breakfast with A. and accidentally didn't come home until after dinner. Hadn't done that in way too long. We went to breakfast (yes - breakfast! before 11 o'clock!) and had tastiness at Wise Sons Jewish Deli, on Valencia (way out @ McCoppin, near 13th and Mission if you're taking the bus). Tasty stuff, nice people. They're squatting in someplace called Jackie's Cafe right now, but I hope they get their own place, because I would go there and try other tasty things. Then we went to a cafe and I made A. listen in great detail to what my class is now about. He was a very good sport about it. And then we went to the library. I checked out a book (for my class, of course), and A. returned some things that were about two years overdue. 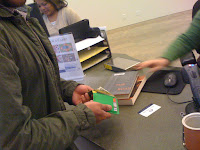 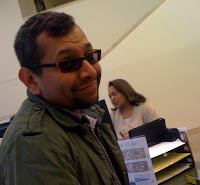 The find was way lower than he was expecting, which was nice. One of the books was The Road, which we read together in our book club. In March of 2009.

I'm teaching it in my class, which I have not been obssessed with thinking about AT ALL.


After breakfast, sometime spent looking for the books (which were, strangely enough, on a shelf), a trip to the library, and quick look at the Union Square Borders, to see if they'd started acting like they were going out of business yet (they haven't, and are still blasting 20% off like it's a real discount), we went to Diptyque and sniffed a whole lot of fragrances and candles. I found one that I might need to get myself. And then we went to Grub and ate some more food. 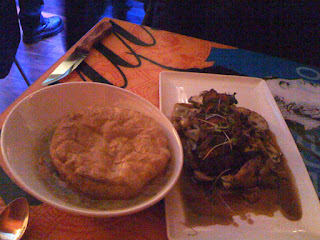 I had a chicken pot pie (it was more like a super tasty stew with a puff pastry in it) and A. had the hanger steak. We agreed that, while his steak was good, my pot pie was superior. Despite the fact that I burned my mouth so badly at one point (on some cauliflower) that I actually had to spit it out. *Oh my god, how embarrassing!* I'll go back to Grub as well, though. They have a lamb porterhouse and a mac and cheese bar and other things that I obviously need to put in my face. After waiting an appropriate amount of time for them to cool, of course.