I've been looking forward to my trip to Portland for a while now. T, one of many good friends that I just don't see often enough, has been living in Portland (partially) and teaching there, and this is the first chance I've had to go and see her. She's driving south for the summer, so we thought it would be fun if I flew up, hung out in Portland for a couple of days, and then accompanied her on the drive down. In addition to the road trip excitement, we'll be stopping at Ashland to take in a show. Good times!

This morning got off to an iffy start: I woke up migrainey, so was dragging a little when I needed to be up and alert to get ready, have some breakfast, and get down to the bus stop. I managed the getting ready, had to skip a more substantial breakfast in favor of a banana and an Odwalla bar, and missed the bus I meant to be on. On the upside, the migraine was mostly tamed by the time I headed out, so that's a plus. And I made it to the airport in plenty of time, had a small snack and some coffee.

The plane to Portland was a tiny thing, so my carefully packed carry-on (I was good and packed just a carry-on bag) had to be gate-checked, which was really no problem. Was excited to meet up w/T. at the airport (she was also flying in from elsewhere today), and we went from there to her office (which has a real door and everything!) to a cute little cafe, where we had a small snack to tide us over until dinner. Dinner was a 6 course extravaganza at Beast, which included tasty things like this: 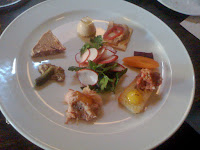 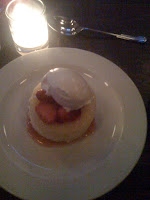 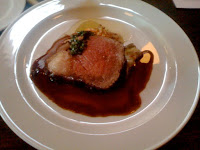 Now I'm back at T's, up later than I should be. A full day planned for tomorrow - Voodoo Doughnuts, Columbia Gorge, a visit to some of Portland's famed food carts, Powell's City of Books, karaoke happy hour at Voicebox (private karaoke rooms), dinner and beer at Deschutes Brewery Portland Pub. Saturday, we'll be up early for brunch at Screen Door, where I will try something called "praline bacon." Let that sink in. Praline bacon. Not sure what to expect, but I love pralines, and I love bacon, so...

Now, sleepy time. Updates, and maybe more pictures to follow. I might even take pictures of something besides food  :)

Email ThisBlogThis!Share to TwitterShare to FacebookShare to Pinterest
Labels: food and drink, in medias res, Portland