Over at Racialicious, something a few of my genre-loving friends might find interesting: "Analyzing Urban Fantasty: Sex, Violence, and the Supernatural" by Tami. An excerpt:


I’ve developed a fondness for the urban fantasy genre. The books make fast, fun reads. But for me, someone who is drawn to issues of race and gender, even trashy, literary confections represent an opportunity for social analysis. As you may have guessed by the descriptions of some of the more popular urban fantasy series, the genre is all about creating new worlds with new societal norms. In urban fantasy, werewolves walk among us, Elvis really is alive (or undead) and the American Vampire League fights for the rights of marginalized former people. What I find curious, is that though their chosen genre frees them from the replicating the hierarchies of the real world, most authors of urban fantasy still manage to re-create common biases surrounding race, gender and sexuality.

I haven't read most of what's mentioned in the article (though I've heard a lot about the Anita Blake books). I have read the Sookie Stackhouse books, and have complained about various issues, ranging from the repetitive plots to the clumsy handling of race to the downright vicious handling of the heroine. As Tami writes, "Sookie Stackhouse is always recovering from some beat down," but this isn't traumatic enough. Harris has also written much about Sookie having been molested as a child, and the sense of helplessness that left her with. Which makes it that much worse that Harris regularly uses the threat of rape as a plot device. Not to mention that Sookie is actually raped in one of the earlier books, by her boyfriend (soon-to-be-ex, but not because he raped her), Bill. With all of this, the full-on, literal torture that happens in book 9 seems almost redundant. Almost.

Racially, Harris fares little better. I'll skip the complaints about the fetishization of beautifully blond, ever-tanning Sookie. I'll also skip the complaints about how rare African American characters are in a series set in Louisiana, where about 1/3 of the population is black. I'll even skip the complaints about how problematic her descriptions of the black characters often are (usually some combination of "He/she was really big/mean-lookin'" and "He was a strappin' buck/obviously had some black blood in him"). Instead, I'll complain about something new. In the most recent installment, which I shouldn't have bothered to read after the disappointment and ick-factor of the last one (which I shouldn't have bothered to read after the bad plots and aforementioned protagonist abuse of the preceding ones), there is a werewolf named Basim al Saud. (Exotic brown person alert!) Harris makes a big deal out of Basim's threatening appearance (not uncommon with Weres) and his brown-ness, though never quite at the same time. (Danger, Will Robinson! Danger!) I think the fact that Sookie covets Basim's corkscrew curls is supposed to throw us off the scent of a problematic representation of otherness, but I know the "perpetuation of marginalization through seemingly complimentary exoticization" ploy when I see it.

Note: In a series set in San Francisco, some character would have walked up and touched Basim's curls (either without asking or while asking, which negates the asking), while exclaiming, "Ohmygod, your hair is SO pretty!" And then Basim, being a Were, would have eaten her face. I'm now going to consider growling the next time some stranger touches my hair.

Anyway, back to Harris. Let's just say that subtlety is not her style, so rather than just exoticising Basim by Sookie's description of him (which she does), she actually calls him exotic, after wondering how he got turned to a werewolf in "wolfless Arabia."

Arabia? What year is this?!

Now, if he were a vampire, it would make sense to have him be from ancient civilization and to refer to it by its ancient name. But, he's a werewolf, and they're just normal people-age (so far), so I think we have to assume that he has not joined Alcide's pack after making his way across Arabia Deserta with a band of nomadic shifters. And I'd say she must have meant Saudi Arabia, but we in the modern world spell that with a "Saudi." I presume that what she meant was "somewhere in the Middle East." Maybe she thought Arabia sounded more poetic, as opposed, at best, some combination of archaic and just plain wrong. Or maybe she meant the neighborhood in/tableware from Finland (who knew?).

None of this really matters, since Basim came to Northern Louisiana from a pack in Houston.

As I said in my review, given that his allegedly Middle Eastern origins play absolutely no part in the plot, why were they such a heavy part of his description? Was Houston not "outsider" enough? And if his foreign-ness was important, why didn't Harris do anything with it? As it stands, it's both racially problematic and superfluous. Or perhaps it wasn't. She mentions that she watched Basim "because he needed watching" and, sure enough, he turns out to have been untrstworthy in a big way, and for very little reason. Perhaps I just missed the purpose of the profiling initial description.

As I also said in my review, I no longer read the books for Sookie. I read the books to see what will happen with Eric and Sookie. But, with that storyline quickly losing its hold on me due to Harris' mishandling of it, there is little to keep me slogging through a series that manages to offend and disturb as much as it entertains. HBO might, despite some missteps, tell me a better version of that story. Hell, there are probably fanfic writers telling better version of that story right now, but HBO's Eric looks like this: 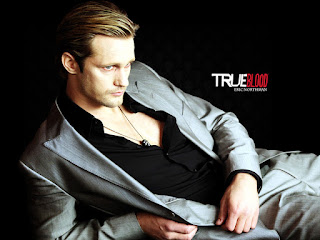 Speaking of HBO's True Blood, this video makes me giggle a little. And the minisodes are amusing.