Thou shalt not start a comment war on someone else's wall

Not surprisingly, the announcement of Bin Laden's death has brought out some ignorance. 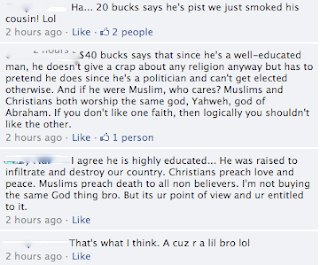 So, to get this straight, Barack Obama is a Muslim terrorist sent to infiltrate and destoy. And All Muslims are related -- OMG, SO FUNNY! And Christianity is only love and peace, while Islam is only death to non-believers. And the God of Abraham that Muslims worship is a different God of Abraham than the one in the Judeo-Christian tradition. (And only the uneducated are religious, but let me just pick one fight at a time.)

The Bible says a lot of things, ranging from "an eye for an eye" to "let he who is without sin cast the first stone." Christians preach a lot of things, from love, peace, and intellectual inquisitiveness to hate, violence, and bigoted small mindedness. What the text says, what people interpret from that, what they preach, and what they practice are often a far cry from consistent.

Totally consistent? The claim that Judaism, Christianity, and Islam can all be understood to worship the same deity. The differences in their interpretations are just as important as the similarities, but that doesn't make it different gods, just different believers.

And Muslims don't preach death to all non-believers any more consistently than Christians do. Some do, many don't. Some mean that literally, many don't.