"Aw, hell - how am I supposed to deal with this fuckedupness?"

--Lafayette, after Eric first saves him from getting his ass beat by sketchy guys in Hotshot, then flies out of his car window with no preamble. (In Eric's defense, he was off to try to help Pam, who was getting tortured by The Magister, who had raided Fangtasia and found all the V.)

That does seem to be the question everyone on the show should be asking right now, doesn't it?

Jason - currently a combination of guilty (about Eggs) and stupid (about everything) - is trying to blackmail Andy into making him a cop. This is obviously a bad idea. Hoyt seems to be getting the wrong idea altogether about the conversation Jessica is having with someone from her old life who recognized her at Merlotte's, where she's now working. Sam, not content with the poor judgment shown by hiring Jessica, has made some ridiculous deal with his family. Bad news, but not as bad as Tara's. Tara hooked up with a vampire, who then glamoured her into inviting him into Sookie's house (which should not be possible). Now he's made her tell him about Sookie, bitten her, bound her, and brought her to Mississippi, all while spouting creepiness about how lonely he's been, and how she's going to fix all that. Sookie has been attacked a couple of times since Bill went missing. Now she's been unceremoniously dumped (over the phone, no less). She's still determined to find Bill, has strong-armed Alcide (her hot hot werewolf bodyguard) into taking her to the "engagement party" for Debbie Pelt, Alcide's ex. This is obviously a terrible idea, as the engagement party turned out to be a branding ceremony, initiating Debbie into the V pack.

Bill has been kidnapped by Russell, the King of Mississippi. In an effort to protect Sookie from both Russell and Lorena (don't even get me started there), he's sworn fealty to him and is currently feeding on a human in the back of his's limo. He also dimed on Eric (and, I believe, Sophie-Anne) about the V-selling. Eric, who already had The Magister on his back, has now (at the suggestion of Pam, who was being tortured at the time) framed Bill for it, which seemed like a better idea than squealing on Sophie-Anne, the Queen of Louisiana. Sophie-Anne is hurting for cash and has ordered the V operation to raise some funds. Her cash flow issues are almost as big a problem as the fact that the King of Mississippi is planning on stealing her territory, which she seems to have no idea of. Also? Russell's supplying the V-junkie werewolves, and obviously plotting to use them. After he put in a special appearance at the party, the weres are all hopped up on V and wolfing out (some, perhaps, involuntarily?), which is just not going to be good news for Sookie, who is there in a terrible disguise. It's also not going to be particularly good news for Alcide (mmm, Alcide), who is still hung up on Debbie, and already came close to getting jumped by Cooter (leader of the V wolves) for being there at all, until Debbie said he should stay and watch the branding, which might make him see reality. Which is that she's a cracked-out skank. (She might not have said it quite like that.) So, yeah...that sucks for him. It'll probably suck worse when shit goes crazy(er) and he gets his ass beat. Or bitten.

Of course, if that means more shirtless Alcide... 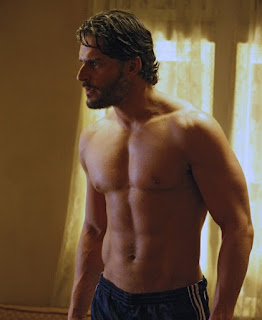 Sorry...what was I talking about?