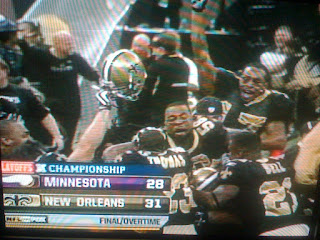 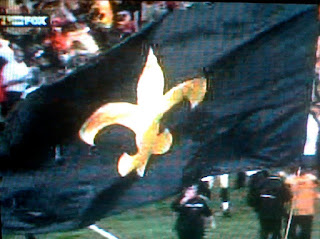 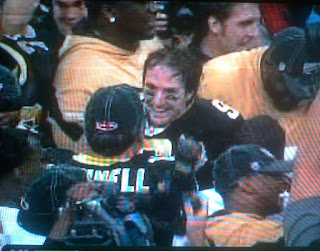 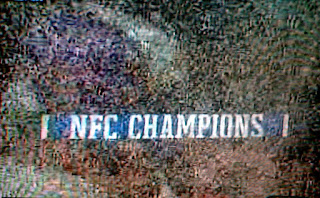 GEAUX SAINTS! No matter what happens today. Of course, what I'd like is to see some Vikings get crushed. You know, metaphorically. But this has been a great season to be a Saints fan.

That was a helluva throw, but I would *not* want to be Brett Favre today. Ouch

I want to know where this referee is from. I don't like him.

OK, they're wearing earplugs. Special, special earplugs. Because it's loud in the 'Dome. I get it. Let's move on.


PS - this is the quietest bunch of men I've ever watched a game with. I feel a little weird making noise, but I obviously have to.

You know you're supposed to catch that, right? Just checking.

THAT'S what they pay you for, boy!

I don't want to be amused by those talking baby commercials, but I kind of am. "It's my shocked face..."

What's the matter, Brett? You look a little overwhelmed. It's ok - it's a stressful situation, with the noise and all.

Wise words from a fellow fan: "It's the right time for an interception."

I call bullshit on that 1st down, but ok, whatever.

I like the Vikings having to kick it away. Now I want another touchdown.

I would really like to see Fevre get sacked right now. Or intercepted. Is that wrong of me?

ARE YOU SHITTING ME?! CATCH IT AND HOLD IT, DIPSHIT!

Whew - that was a rough quarter! Take a breather, boys. You need to open a can in the second half.


That fumble would have been nice.

This game is way too close for my liking.

IT'S A GODDAMNED TACKLE, ASSHOLE!

Hm. It lookslike a touchdown to me, but I might be biased.

Ooh, that was almost an interception. Let's get it next time!

OK, that was a nice throw, Brett. You should rest now.

Y'all need to not let him run like that. This game is still too close.

This would be a great time for a sack, boys.

You're kidding me that *this* is what you're doing at this point in the game?!

1:06 4th, and the Saints have decided that now is the time to let them go? UNACCEPTABLE!

I think we're almost as loud as the Dome in here.

eta: I got so excited that I forgot to put up the final score. And the pictures. Two birds...
Posted by elisamaza76 at 5:56 PM