Last night, I came across a couple of chairs being discarded. The one I remembered to take a picture of looked like this: 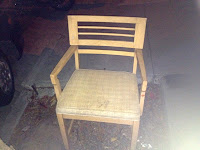 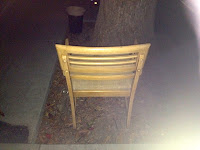 I didn't take this one because the arms make it too difficult to stow away when not in use. The one I took is mostly the same, but is an armless version, and didn't have a ginormous stain on it. I took it home, thinking I'd throw the gross (not stained, but ugly, old, and obviously crumbling inside) upholstery away, clean the frame and leave it until I had time/money to get new wood for the seat (I presumed it would be gross as well).

But, when I opened it up, is wasn't gross inside at all. The innards looked supremely uncomfortable. On top of the wood, there was a base that reminded me steel wool, then a thin layer of something that looked like household insulation, and then the remains of what had once been a foam cushion -- it was hard, and had crumbled into smaller chunks. I'm not really sure how comfortable it was when it was in new condition, and can't imagine anyone having enjoyed sitting on it for quite some time.

Since it turned out not to be gross, and the wood for the seat was in perfectly good condition, I went ahead and cleaned it up, then reupholstered it with things I already had around the house: some fabric from Piedmont Fabric's moving sale, a bag of stuffing from an accent pillow that exploded, and my trusty staple gun, which hadn't seen use in some time. 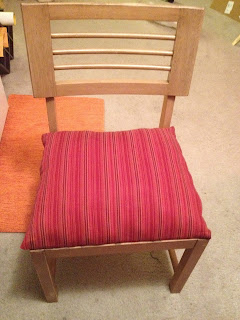 It's a little lumpy --  I'll open it up and restuff it at some point, now that I know how easy it is. I also put the seat back on just a tiny bit further back than it should have been (you can hardly tell); when I restuff it, I'll recenter it. Still, not bad for an impromptu, first-time reupholstering  :)

Next up: getting started on some of the sewing projects, and maybe doing something exciting to the little bookcase I'm using as a bar.