So, maybe you've heard about the the Texas Republican Party's 2012 platform? The first link to it that I saw went to a Comedy Central blog, so I was really hoping it was a joke that got reported as news -- maybe HuffPo and Wonkette had just fallen down on fact-checking duties today? But, no, it's real. As in linked-to-from-the-Texas-GOP-Convention-homepage real. 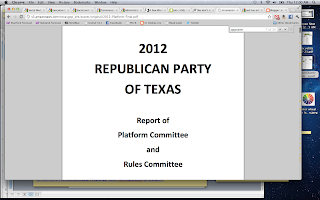 There's a lot here to make you sick, but here's the part that got it brought to my attention:

We oppose the teaching of Higher Order Thinking Skills (HOTS) (values clarification), critical thinking skills and similar programs that are simply a relabeling of Outcome-Based Education (OBE) (mastery learning) which focus on behavior modification and have the purpose of challenging the student’s fixed beliefs and undermining parental authority.


Really? REALLY?! It's like the Texas GOP read my last post, and decided to respond in the way most likely to make my head explode.


See, except that that would involve the Texas GOP *actually* engaging with the thought sof others, which they have officially stated that they have no interest in doing. Or allowing their children to do. I just-- you know what, I'm just going to quote myself in response to this, because it's all I have to say.

I have tried to teach...[my students] to be better thinkers and writers, better discussants and readers. Now and again, I have explicitly included a little bit of being a better person, but I admit freely that I included it, implicitly and a lot, all of the time.
.....
Coming into contact with the thoughts of others -- especially concerning the things we consider important -- and being able to deal with those thoughts in an attentive, thoughtful, critically engaged manner is the best way I know of making our own thoughts stronger, and by extension, making our actions make more sense.


You know what happens when you try to fight that? You get a political platform that seeks to codify bigotry and intolerance, that holds up ignorance as a virtue, all out of a fear of having your "fixed beliefs" held up to the light of actual engagement with the world.