Thanks to Pinterest, I've been reading a lot about homemade cleaning supplies. Just recently, I ran across this post about "orange vinegar." Two orange peels in a 16 oz mason jar, filled with vinegar and left for two weeks for a pleasant-smelling natural cleaning product. I decided I'd rather lemon-scented. I'd already been using vinegar to clean some things (cleanup around the kitchen, but it also works wonders at getting deodorant stains out of clothes!), but only had a bit left (maybe about 10oz), so I thought I'd pick up a big jug while out buying groceries yesterday. But I didn't make it to Safeway, and neither CVS, now Walgreens, not Trader Joe's carries big jugs of vinegar, so I decided to modify the recipe. I poured my 10oz of vinegar over a small bag's worth of lemon peels, in a smaller mason jar, and filled the rest of the way (not far, really), with water. 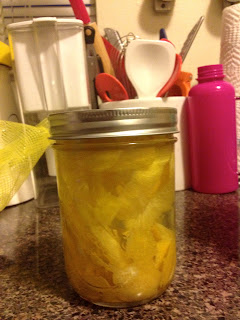 I'd actually forgotten that the post suggested 2 weeks steeping. I checked this morning, to see what it smelled like, and it's already got only a slight whiff of vinegar to it -- maybe because it's a bit diluted, and also has more peels in it? I'll leave it a few days, then strain it into a spray bottle.

in other news, I'd picked up some other fruits to use in the "weightorade" (via Dr. Oz) I've been making. It's just green tea with tangerines and mint. It allegedly boosts your metabolism, because green tea and tangerine (from the original recipe) allegedly boost your metabolism. I did a little research, and it seems like tangerine's metabolism-boosting claims are based in vitamin C's metabolism-boosting claims, which are, like most weight-related claims, not really proven. But, I'm in little danger of overdosing on vitamin C, and it seemed like a good excuse to drink more water, and jazz it up, flavor-wise, without jacking up the calorie content so high (I add just a little bit of agave nectar while the tea is hot). So, I figured it can't hurt. Anyway, the original recipe was tangerine, mint, and green tea, but I've been playing around with other fruits that have lots of vitamin C in them. This time, I picked up blackberries and strawberries. Since I was running this lemon-vinegar experiment, I decided to make blackberry lemonade.


Lucky I did this last night. Before bed, I washed my Brita pitcher, and left a new filter soaking in it. This morning, I awoke to find that the water had been shut off in my building (some sort of emergency in another apartment). So, as it turns out, this lemonade is the only thing I have to drink right now that's not alcoholic!