How is it already the end of June?

So, I don't know how it got to be so long since my last post. Is it really the end of June? How is that possible?

Not a ton to write - have been doing a bit of cleaning, book selling, and general hanging out. I'm starting to get excited about my trip to La. I still have nothing to write, but have been reading and thinking. Pretty much the norm around here.

Out of the norm last week was that  L., (my best friend M's big sister) was here in the Bay Area for a few days. I gathered some suggestions for her on fun things to do (which I will eventually compile in some form, and perhaps even share), and made plans to see her on Friday. What did we do? Karaoke, of course! She was a little hesitant, but eventually went up and sang "Your Love is King," by Sade. It was well done, and I have every intention of dragging her to karaoke when I'm *finally* able to do some with my best friend in August.

I also had every intention of posting a few pictures of her at the mic, but iPhoto had some kind of freak out while they were transferring, and they got erased from the phone, but not saved to the computer. CURSES! Strangely enough, the pictures I didn't know one of my fellow karaoke-goers had taken of *me* did not get erased. Don't know which song this was during, but I pretty much always look the same when I sing. "Stare at the words. Stare at the words. Don't look at the people - STARE AT THE WORDS!" 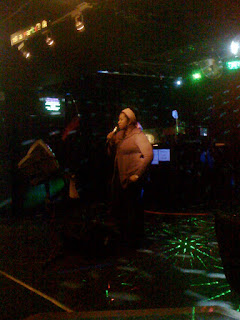 The evening started off a little slow, with only a few other (rather annoying) people in the bar. By the end of the night, though... Well, at some point, these two women sang "I Wanna Dance With Somebody," and then the next person sang "Fame," and it was a full-on party at Encore. It's also possible that I sang backing vocals on a Meatloaf song (I'd Do Anything For Love), but luckily, there are no pictures of that  :)

On Saturday night, I went to a friend's birthday party. Saw people I very much like to see, had good conversations and tasty foods, and also got to debut one of the dresses I recently bought. I also got to road test the twist out, which continues to get positive feedback. Sadly, it'll get washed out in a day or so. It'll probably be a while before I feel like the effort of twisting it, but who knows - maybe I'll get inspired later in the week.

On Sunday, R. came over to watch True Blood. I was annoyed to find that my TiVo/Comcast interface had fritzed out, resulting in not actually recording the 6pm broadcast. Grr. Luckily, R. hadn't seen episode 2, so we watched that instead. I'd have felt terrible if she'd come over for no reason at all - she'd just done a triathlon earlier in the day! She was a good sport, though, and we did, eventually, watch both eps. 2 & 3. It seemed like we were in the clear until the recording stopped early - it was basically the end (we'd missed maybe 30 more seconds) but it was particularly annoying after the earlier recording difficulties, and because of the extreme unpleasantness of the image it ended on (I've already posted about the show, so won't get into that here).

In happier news, R., being a total rockstar, bested her previous triathlon time by a substantial margin (like 20 minutes). She claims not to be athletic, but I told her that having completed her 3rd triathlon probably means that's not true.

Here's R. (in a very red part of my red living room), with her triathlon "tat" (race number). 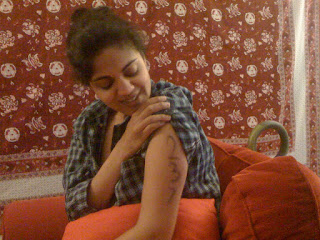 This morning, I slept through this earthquake, got stuff done before I even got out of bed (relatively painless call to a credit card company - thought there was a problem with the debt management program, but it's all fine), then pulled out the food processor (which I should use all the time because it's FABULOUS!) for a bit of experimental kitchen fun. 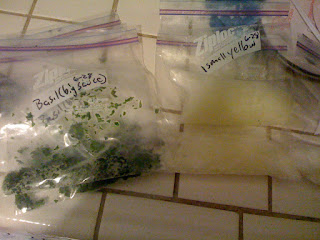 One of my roommates has a big bag of onions and wants help using them. I decided to try freezing some for use in sauces. I also read that I could do the same thing with basil, so I'm trying that, too. If it works, it'll be a good discovery. No need for things to go to waste because I can't use them quickly enough (I recently bought a basil plant, and it seemed like it wanted to be trimmed), and perhaps a time saver for the next round of sauce-making.

I also decided to make a couple of different kinds of infused water, in an attempt to get myself to drink more. Lemon I already know is good, so I made a pitcher of that. I thought I'd be trying out a smaller pitcher of cucumber, but the cucumber I thought I was going to use had overstayed its welcome. Instead, I tried it with basil, which I've read is everything from mild and refreshing to great for digestion - we'll see how that goes. I also made an iced tea with decaffeinated Earl Grey, honey, and basil. It's delicious!

Now for some errands, and maybe a little work-related reading before I'm allowed to laze away the rest of the evening.