The opinions expressed in this post do not reflect those of the management...

Tonight, I am meditating on vengeance.

No, no - not to worry! I have not been grievously wronged. Nor am I *plotting* revenge - I'm just meditating on it. See, I'm doing some cleaning (what else would I be doing when I've got reading to do and a proposal to work on?), and I came across the pages I saved from last year's desk calendar, the 2009 version of this: 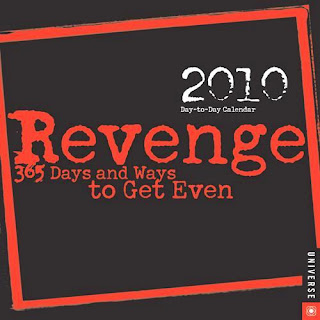 I'm usually more of a Word-a-Day girl, but when I went to get a calendar (after they were all on clearance, of course), this was the only one left that I as willing to pay for. The rest were full of puppies and flowers and inspirational verses--BLECCHHH!

Anyway, I spent many a pleasant lunch break/procrastination hour at work, chuckling to myself at the better quotes and schemes from the calendar. An example of the "workplace revenge" genre:

Can't you just see the look on the office asshole's face?

Or, how about this gem, one of my favorites:

"Pour powdered gelatin down your target's toilet. It takes a few days to fully solidify, but then gums up the whole system."

Tell me that's not fantastic on a really warped level. I mean, the mental image alone! You'd obviously have to use pure gelatin (no coloring) for maximum effect...

Of course, I would never that to anyone. Because that would be terrible. And because now it's on this page, and could totally be traced back to me. JUST KIDDING! I would never do that to someone because it is wrong, and a little bit crazy. If I ever really feel the need to take revenge on someone, I will not bother with being a little crazy. JUST KIDDING, AGAIN.