Came home today to a box from amazon.com. Thought, "Yay!" And then, "Hm. I don't remember ordering anything that would be here yet, and in a box that size." And then, "Uh-oh. Did I accidentally order something extra, like pajama pants or a bunch of books or something?" I've been *really* sleepy lately, and I was afraid that I'd pushed a button when I hadn't meant to. But, no, the box was from a friend who'd been kind enough to send part of his recent gift card bounty my way. 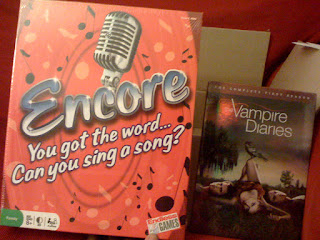 I played Encore at a friend's house once and it was lots of fun! More challenging than I'd expected it to be. And the first season of The Vampire DIaries was surprisingly enjoyable - I'd been a naysayer, but was won over, largely by Ian Somerhalder's hotness some surprisingly compelling narrative choices that happen later in the season. (Shut up. They can't all be Buffy, ok?!)

Speaking of Buffy, I'm about to start watching with my class. Well, not the first episode - they're on their own for the screening of The Body, which I can only watch from my own couch, with a box of kleenex and a blanket. This should also get me back into the rewatch, which I am woefully behind one. Stupid life, getting in the way of my DVD watching.