Go Fug Yourself has done a "Fug: The Cover" on the Rolling Stone issue featuring Alexander Skarsgard, Anna Paquin, and Stephen Moyer. It's hilarious to me - maybe my favorite thing to come out of True Blood this season. Here's the cover: 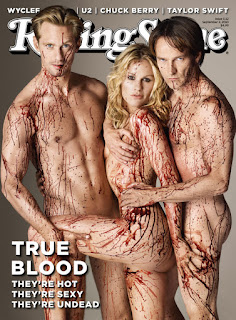 My favorite quote from the entry? "SMOY: Blue Steel. BLUE STEEL!"  You can check out the whole thing over at Go Fug Yourself.

In other True Blood news, Racialicious' roundtable for episode 9 is up. As is usually the case, it's full of excellence.

This is where I would usually put my own opinions about the last episode and the season so far, but I think I'll skip that this week, except to say that I think they finally did some things right with Tara in episode 9. It shouldn't have taken until episode 9, and it may still turn out to be too little too late for this season, but I'd love it if this were a turning point for the show.