I hadn't heard about this encounter before now, but I love it! As someone who already believes that the stories we tell are important, that TV and films both shape and reflect us (sometimes in ways we don't acknowledge or even understand), and that speculative fiction can be a particularly powerful way for us to imagine human possibility, I find the idea of MLK telling Nichols to stay with Star Trek for the greater good quite moving. And it puts me in mind of another SFF character that broke racial barriers, at least for this viewer:


Elisa Maza was one of many awesome things about Gargoyles, the utterly fantastic animated series that ran as part of the Disney Afternoon from 1994-1996. One episode of the show, entitled "The Journey," aired on ABC in Disney's One Saturday Morning programming.

Other sources will tell you that the ABC episode I speak of was actually the first of 13, the beginning of a spin-off called something ridiculous, like "Gargoyles: The Goliath Chronicles." This is patently untrue, as the monstrosity that aired on ABC was not at all the same show, and should, for the most part, be forgotten. Or disavowed. Or stabbed until killed. Dead. It may help you to know at this point that, in my mind, Heroes will be easy to marathon, when I finally get around to it, because it only ran for one season. I also maintain that The Matrix was an excellent movie, and had no sequels.

Elisa Maza was notable to me because she was a serious badass -- a lady cop with a great old car, a killer roundhouse, and serious attitude, she flew with the Gargoyles, taking on baddies from mobsters to mythical creatures to an uber-rich supervillain diabolical enough to have his own TV Trope. She also had Fantastic Disney Hair.

As if all of that wasn't enough to make her my favorite, here's a picture of her family: 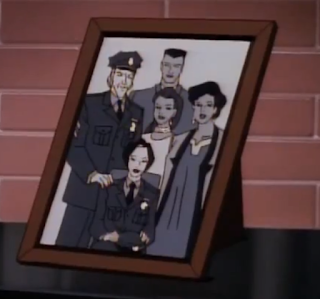 Seated is a young and uncharacteristically pale-faced Elisa Maza. Standing, far left, is her dad, Peter Maza. On the far right is her mom, Diane Maza. The younger man is Elisa's brother, Derek, who later becomes an important character in his own right. In the middle is Beth Maza, the youngest of the family. We meet all save Beth in "Deadly Force," about halfway-ish through Season One, when shit gets so real that a worried Maza family gathers at Elisa's hospital bedside. At that first intro, it's clear that Diane Maza is African American, and that Peter Maza is not. I believe it's not until Season 2 that we're told he's of Hopi descent. I remember my response being something along the lines of, "Wait, so Elisa Maza's really, really not white? Sweet!"

It doesn't seem like it would be a big deal, a random cartoon character being multi-ethnic. But something about the way that it was handled, as if it were the most normal thing in the world, made her that much more exciting. Maybe it was the fact that I loved that show, that I thought that character had a lot of good things going. Or maybe it was the fact that, thinking back, I couldn't remember another black female character on a cartoon I'd loved since Shana (Jem, 1985-1988) and Diana (Dungeons and Dragons, 1983-1985).


But I think it was more than that. For me, Elisa Maza was an animated descendant of Lt. Uhura - a female character of color, making it look perfectly normal for brown women to kick ass and wield power. Instead of outer space, she traveled through time, around the world, and through the streets and skies of Manhattan, encountering new life and new civilizations of her own.

Of course, Elisa Maza traced her lineage back to the Enterprise in more explicit ways: Diane Maza, a native New Yorker whose ancestors hail from Nigeria, was voiced by none other than Lt. Uhura herself, Nichelle Nichols.