So, you're probably wondering why I've been so quiet about the new Twilight movie. Maybe you even thought I'd developed some sense, and renounced my utterly undignified love for those poorly written, badly acted, so-called films. Maybe you thought...

You didn't really think that, did you? 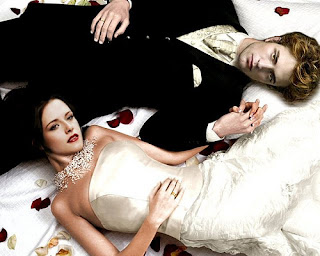 No, as you might imagine, I could not wait to see the newest installment of The Twilight Saga (Twilight: Breaking Dawn, part 1). I saw it on Saturday afternoon with S., C., C., and E, and we even made a picnic in line beforehand (where we were, embarrassingly enough, the first and, for a while, only people in line). Should I bother to review it? I mean, you already know it wasn't good. It was a better movie that the first one, but that's a really low bar. It was, I believe, the best of all 4, but that's not really saying much, either. It was beautifully shot, they continue to try to tone down the creepiness of the books, and they continue to make really unwise choices with the werewolves. I mean, in the scene where Jacob finally tells Sam and -- oh, whatever, there's this scene, and it's full of wolves, and there's this really terrible echo effect, and the audience laughed and laughed, which *has* to be their intention by this point, right?

Anyway, rather than wasting my time reviewing it in depth, I'll just say that it was bad, thoroughly entertaining, with moments of hilarity -- mostly due, again, to Billy Burke and Anna Kendrick, but with an assist from the most hilarious/disturbing morning-after scene ever written. And I actually think they should get nominated for a makeup award, because I really hope they didn't make KStew lose that much weight for the dying-for-the-fetus scenes.

I won't bother reviewing it in depth, but I did take a few moments to think about why I watch those crapfests in the first place, and why I tore through the books like the pages were laced with crack. Twilight is one of my few honest-to-god guilty pleasures, and the ladies over at Pop Culture Curmudgeon were kind enough to invite me to do a guest post on. You can check it out here, if you like: "Even My Displeasure is Guilty." Here's an excerpt:


If you were around when I read the books, you know I consumed them voraciously. You also know that I spent a lot of time being absolutely horrified by the images of femininity, masculinity, and life in general Meyer propagates. I honestly believe that Stephenie Meyer hates women, or at least the ones in her novel, and just doesn't realize it. Why, then, I wondered, did I keep reading? And why did I go to see the latest move in the series last weekend? The answers there may be a little different. I kept reading the books because they were addictive, in the way that immature, unhealthy melodrama often is (see soap operas, romance novels, the GOP debates). Bella and Edward's so-called-romance was an extended train wreck, and I rubbernecked my way through with glee...

Go check it out!