I don't think my allergies have adjusted to being home in New Orleans as quickly as my psyche has. Or maybe my sinuses are just not as good at repressing their responses as my psyche is. Whatever the case, I feel like coming home has been pretty easy, so far: there's obviously some angst -- new year doesn't really mean new personality -- but, for the most part, I feel like I'm kind of ok with being here. I'm definitely feeling good about being so close to family and friends I've lived far away from for quite some time. But, I'm not sure my respiratory system is feeling the love. I thought it was allergies (it probably was), then I felt like I was fighting something off (I probably was), and then there a random sore throat, which has sort of come and gone for several days. This is the stage at which I might go to a doctor, if not for the continued unemployment, and it's resulting lack of health insurance; instead, I took advantage of the fact that I'm unemployed by dosing up on cold meds and going back to sleep.

When I got up take a second crack at Tuesday, I decided that it was as good a day as any to embark on one of my new adventures for the year: juicing. Fruits and veggies, not steroids. I ran across a "detoxing" recipe that's supposed to be helpful when fighting a cold, so I started with that one:

The recipe also called for 1 beet, which is *obviously* not happening. I added a chunk of ginger, or at least I think I did -- I know that I peeled it, but I have no memory of putting it into the juicer, and thought I'd sat it on the counter. But, it's nowhere to be found, and the juice does have a little bit of a gingery sharpness to it, so I'm guessing it's in there. 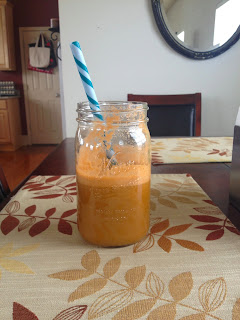 I was skeptical about drinking vegetables, but it's surprisingly tasty. Though I suspect it would be tastier with a shot of vodka in it. I don't really care for Bloody Marys, but I always want to like them -- it's like they're almost delicious, but not quite. Now, I wonder if a Carrot-Ginger Mary would work...

But I digress. New year, new adventures. I've moved; I'm still looking for a job and trying to figure out a new direction; being unemployed sucks, except for the part where you can just go back to sleep if you wake up feeling sick; and my first attempt at juicing was successful enough that I'll keep doing it.