Well, I finally uploaded a bunch of pictures and opened the "new post" window to post some fun pictures from the last few weeks, as a way of catching up on blogging. Unfortunately, iPhoto is a piece of shit, and it ate those pictures. Stopped responding during upload and I had to force quit. It did not manage to upload the pictures, but did manage to erase them from my phone. I am most unhappy about losing the super-cute picture of my friends Q. and A., especially since A. is leaving on Thursday.

But here's a mutant cherry: 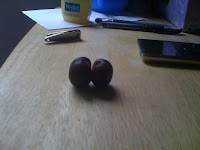 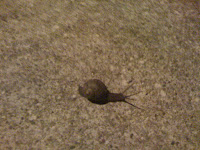 And here's a snail I encountered the night I decided to walk home from the BART station. 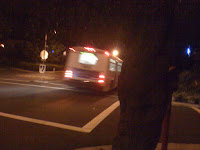 This is the bus I had decided not to wait for that night, pulling off from the bus stop where I would have gotten off, just as I arrived on foot. Because I had chosen on purpose to walk, I was excited that we got there at the same time, rather than being livid that I'd missed the bus and then caught up with it. 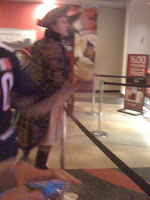 And here's a very fuzzy shot of a guy in full pirate gear. I was in line to buy tickets for X-Men: First Class, but I presume he was going to Pirates of the Carribean.

Here's where the picture from the goodbye party would go, it it hadn't been erased. I'd say that it was a fun event, and that, while I'll miss him, I'm happy A is getting the hell out of here.

Email ThisBlogThis!Share to TwitterShare to FacebookShare to Pinterest
Labels: 365(ish), in medias res